Formal SignWriting is one particular computerized design for Sutton SignWriting that envisions a sign as a two part word. Each word is written as a string of characters that can be recognized and processed by regular expressions. The design has been optimized for display, searching, sorting, text flow, and other character processing.

From 1974 to 2019, SignWriting was financially supported and promoted through the Center for Sutton Movement Writing (CSMW) non-profit.

From 1981 to 1984, publishing efforts include stencils and wax transfers.

From 1986 to 1995, SignWriting is successfully computer encoding with keyboarding support.

In 2002, advanced sorting of SignWriting dictionaries is available.

In 2004, a drag-and-drop interface is created for SignWriting.

In 2012, the Formal SignWriting in ASCII (FSW) specification is released.

In 2015, the Sutton SignWriting Block is added to the Unicode Standard.

In 2017, the SignWriting in Unicode (SWU) specification is released.

In 2018, the Center for Sutton Movement Writing (CSMW) lost a major funding source.

In 2019, Steve Slevinski started a Patreon campaign to support his current and future work with SignWriting.

In 2020, Steve Slevinski assumed full responsibility for administering and financially supporting the SignWriting websites. He donates his time to support SignWriting's past, present, and future. The income from the Patreon campaign currently supports the hosting fees for the websites. 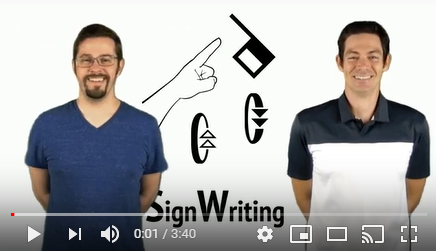 Adam Frost & Garrett Bose explain why SignWriting is innovative. They answer the question "How does SignWriting work?". They demonstrate how to write Handshape & Palm Orientation, Movement, and Facial Expressions, Location and Speed (Tempo). They read ASL poetry. 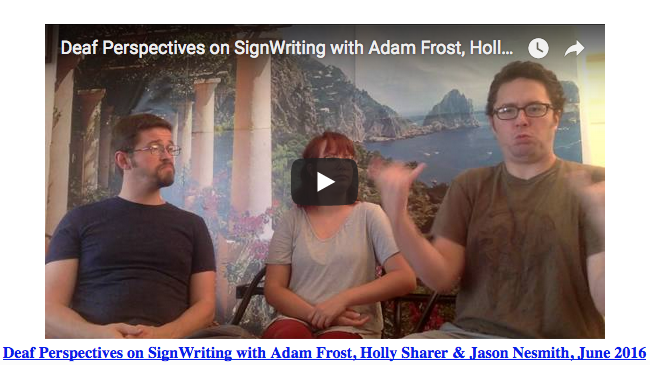 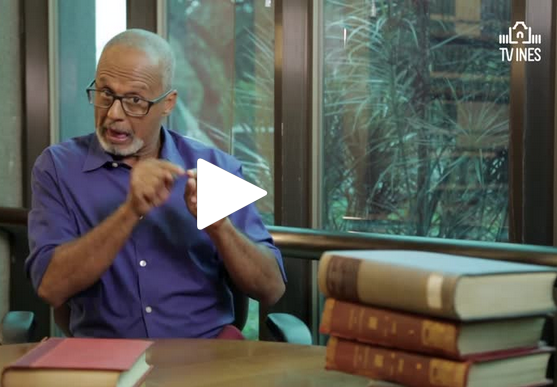 History of SignWriting in Brazil on TV INES. 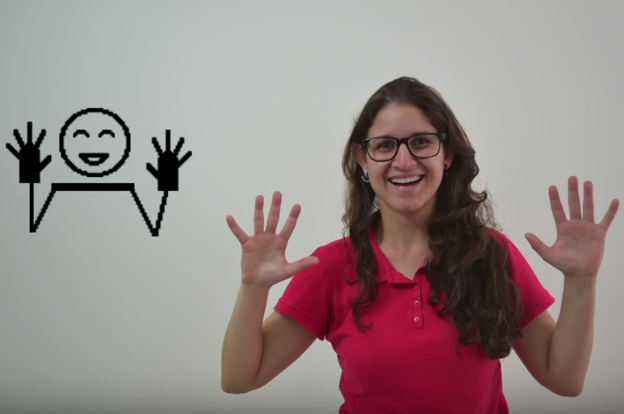 In 2010, Valerie Sutton and Steve Slevinski released the International SignWriting Alphabet 2010. The ISWA 2010 is a highly refined symbol set that focuses on SignWriting. The design balances complexity, efficiency, and usability.

SignWriting is an unusual script because the symbols of the script are used spatially in two dimensions. Most other scripts use a sequential list of individual symbols that may or may not connect and morph when used in combination. SignWriting is different because the writer decides the placement of static symbols on a two-dimensional canvas. The symbols are static because they do not change size or shape. Some symbols can be transformed into other symbols through a change of variation, fill, or rotation.

When writing signs by hand, the variety and style of symbols is potentially unlimited. When writing on computers, the symbol set must be limited and organized.

In 1986, the first computerized symbol set for SignWriting was created on the Apple IIe and Apple IIc. This first symbol set was small due to the 128KB memory limit.

By 1995, the symbol set had expanded into a complete set known as the Sign Symbol Sequence (SSS). The SSS-1995 is available as a zip file of GIFs.

In 1999, the symbol set was revamped without the limitations imposed upon the SSS-1995. The SSS-1999 is available as a zip file of GIFs.

In 2002, the symbol set was reorganized with a multi-level hierarchy and the modern symbol ID. The SSS-2002 is available as a zip file of GIFs or SVGs.

By 2004, the symbol set was further expanded to include general movement writing concepts and renamed the International Movement Writing Alphabet. The IMWA-2004 has a wide variety of references and downloads available.

In 2008, the symbol set was refocused on SignWriting and renamed the International SignWriting Alphabet. The ISWA-2008 has a wide variety of references and downloads available. The ISWA 2008 was the first symbol set released under the Open Font License.

In 2010, the symbol set was refactored one final time, resulting in the International SignWriting Alphabet 2010. The ISWA-2010 is stable, widely supported, and standardized. 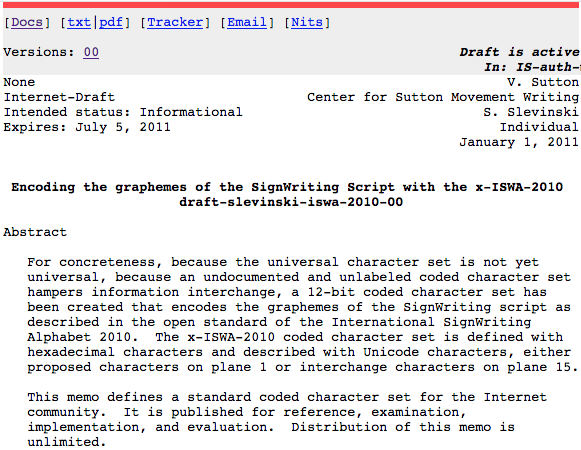 Published through the IETF, this Internet Draft defines the ISWA 2010 and related topics, such as the 7 categories, 30 groups, and 652 bases. 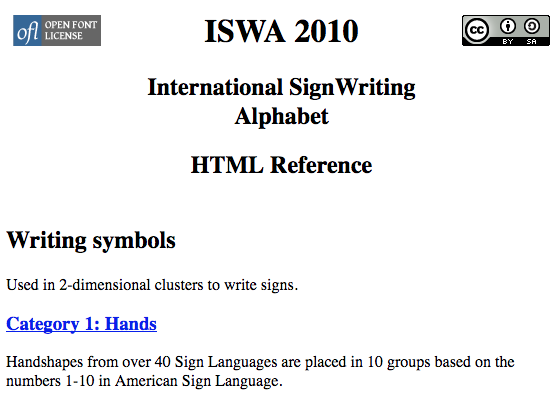 Available to view online or download, this HTML references includes the symbols as PNG images. 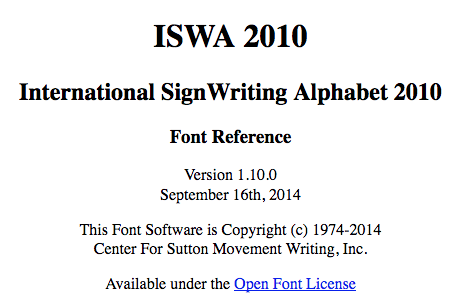 Available to view online. This reference includes many historical fonts for ISWA 2010. 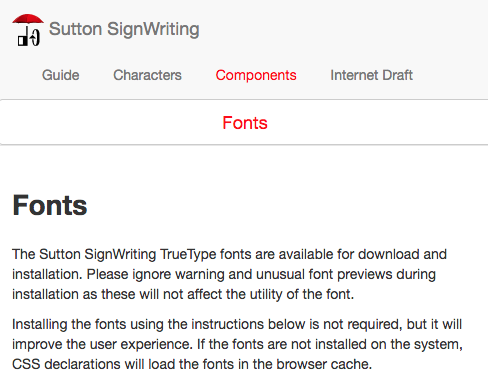 Available to view online as part of the Sutton SignWriting Project. This reference discusses the three fonts of 2017 and their use. 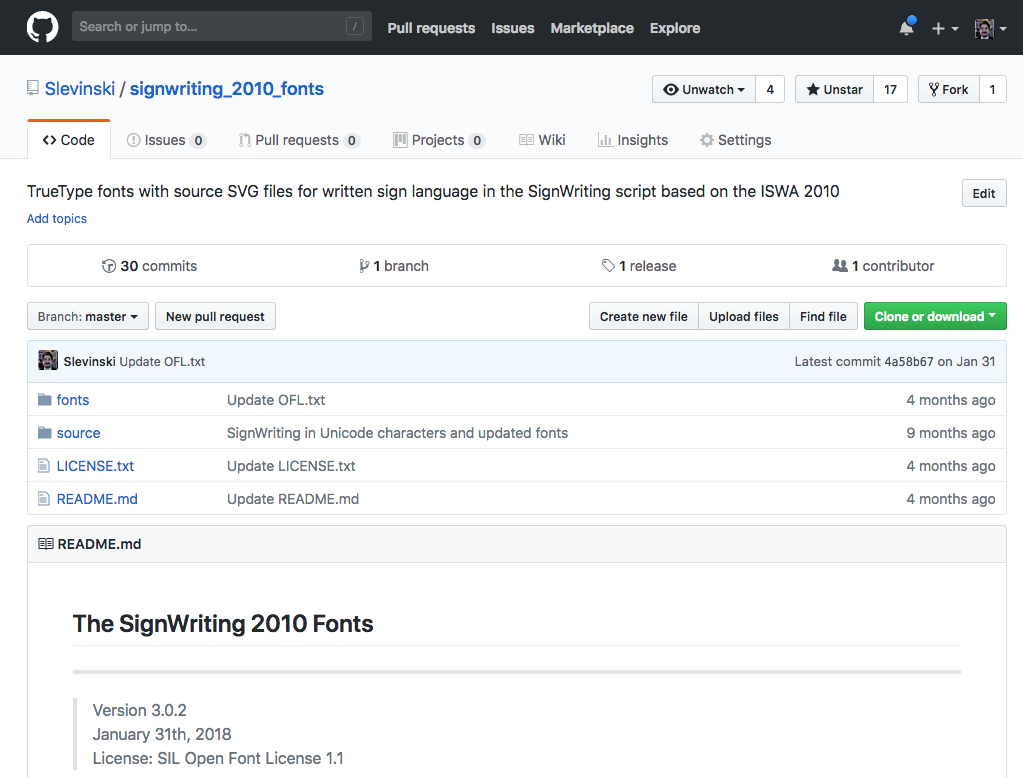 Available as a GitHub repo, this project includes the source SVG for the ISWA 2010 along with additional fonts. 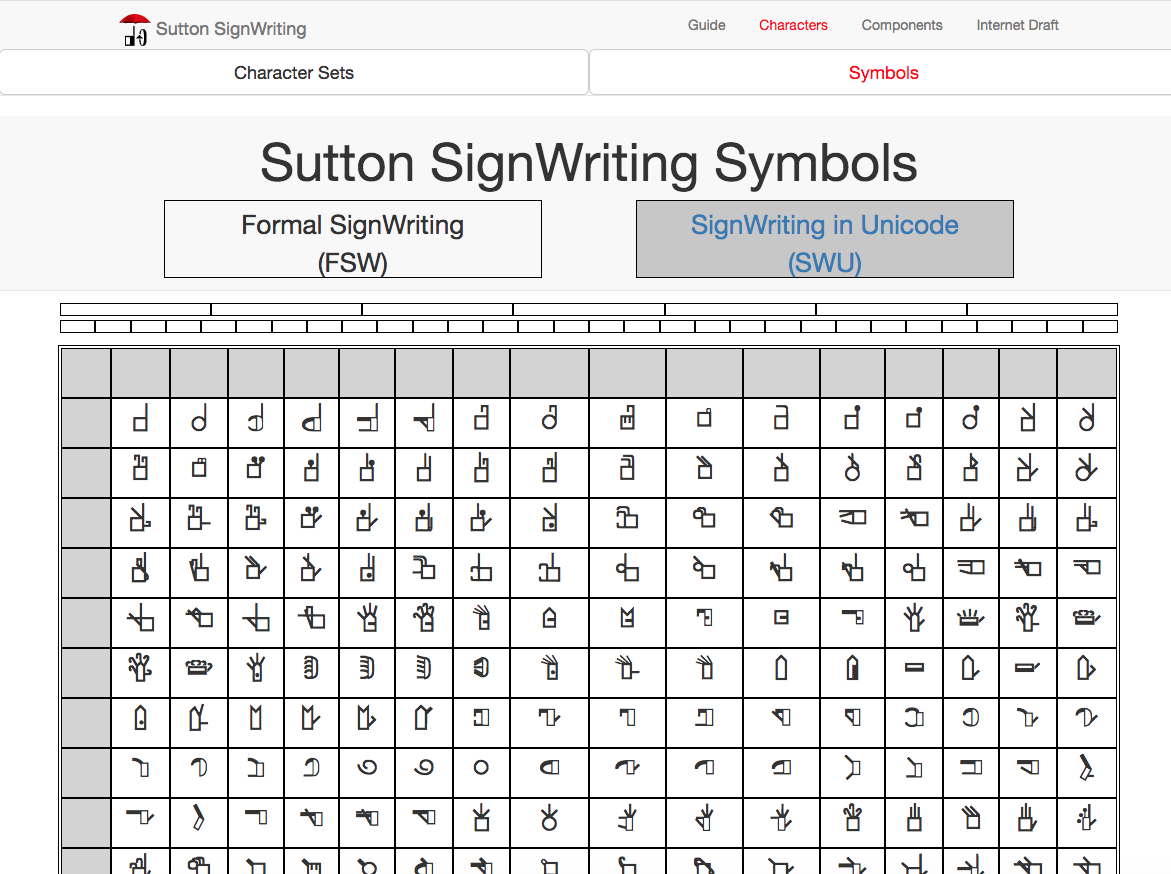 Available to view online as part of the Sutton SignWriting Project. This reference show the symbols using a clickable grid with hover text using either ASCII or Unicode characters. 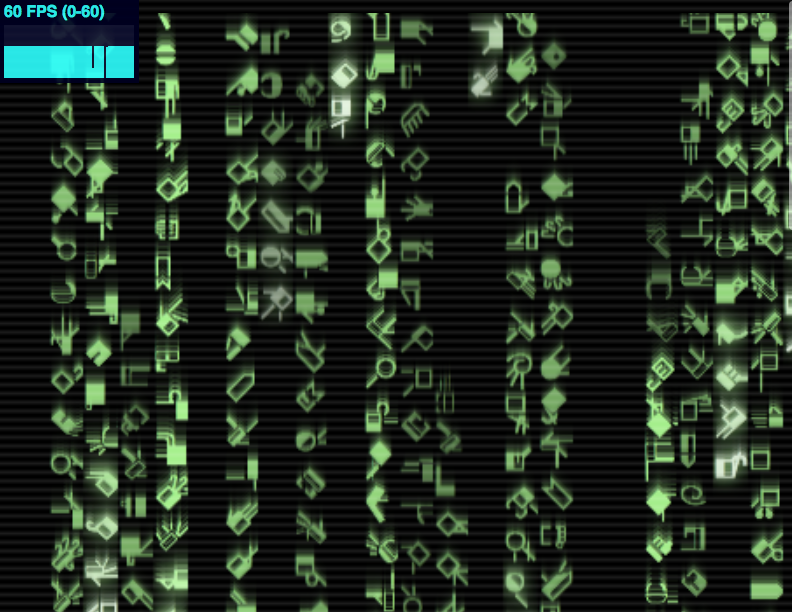 This demo uses the Sutton SignWriting Line Font in a JavaScript/Canvas animation with a Matrix style.

Signs are written as SignWriting words
with mathamatical names of ASCII characters
from the set: ABLMRS0123456789xabcdef.
Stable since January 2012.

In 2012, Steve Slevinski released the Formal SignWriting in ASCII specification. FSW is a highly refined character set that integrates with Regular Expressions, Scalar Vector Graphics, and other standard techologies. The design is complete, universal, empowering, and possible.

FSW is a heuristic model. The first prototypes were created in 2008. Through trial and error, the model was improved to reduce the complexity and the computation cost of the implementations. The model has been optimized for common usage and processing.

In 1986, a custom data format was used for SignWriter Dos.

In 1999, a custom data format was used for SignWriter Java.

In 2004, the build string was created as a string of comma delimited values.

In 2007, an XML format called SignWriting Markup Language-Simple (SWML-S) was created as an update to the build string.

In 2012, Formal SignWriting was released.

In 2014, the searching of Formal SignWriting strings was expanded to include the temproal prefix.

In 2015, the styling string was added to Formal SignWriting. 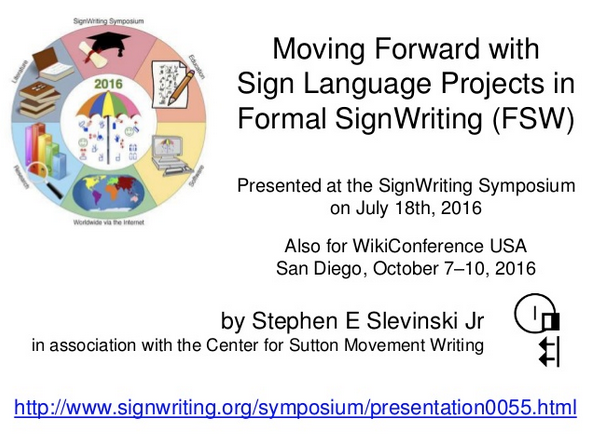 This presentation covers Formal SignWriting, associated technologies, and Wikimedia projects for sign language, such as the American Sign Language Wikipedia. 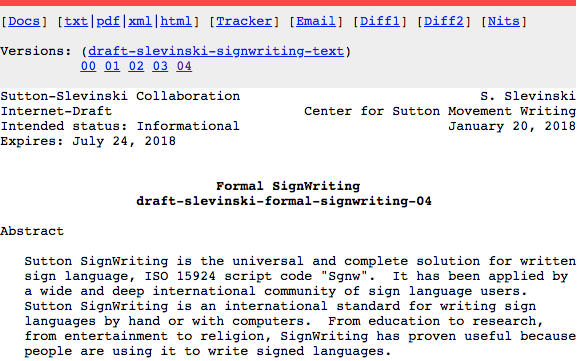 Published through the IETF, this Internet Draft defines Formal SignWriting and the associated standards. 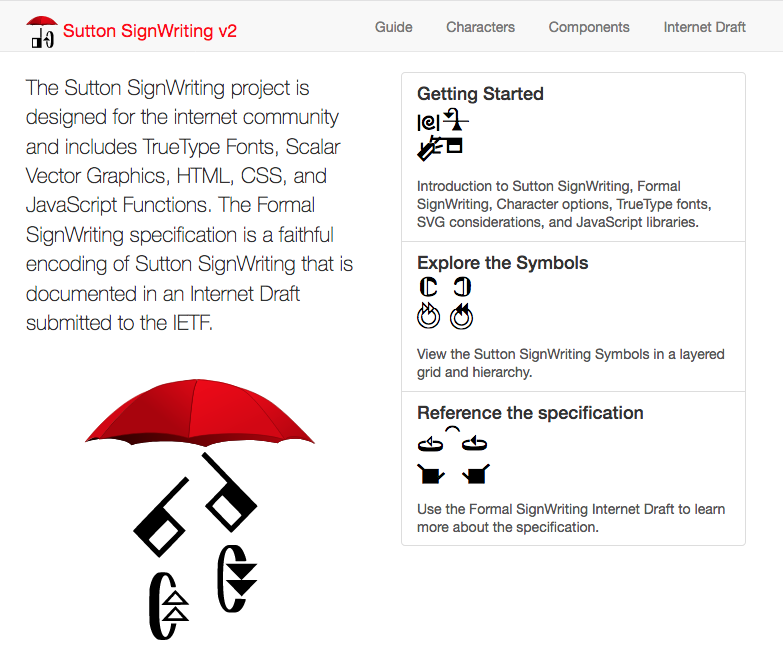 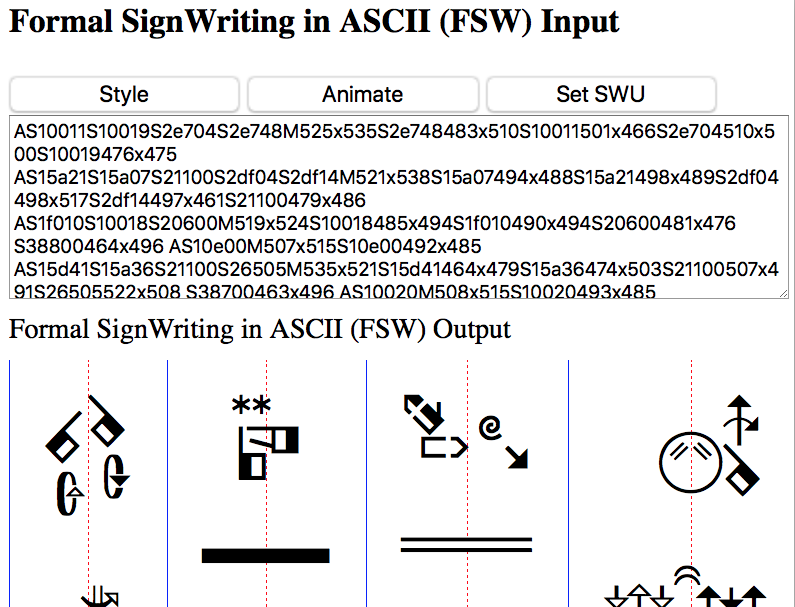 Characters are used to name signs.

Fonts are used to view signs.

In 2011, the symbol images were rereleased as SVG images.

In 2013, a prototype two-dimensional font was released for SignWriting using Graphite.

In 2014, production ready TrueType Fonts were created for the SignWriting symbols.

In 2015, CSS font-face declarations were created to load the fonts without system installation.

In 2016, the symbol images in SVG were improved. The sizes of some symbols were updated.

In 2017, the SignWriting in Unicode character set was published, along with three TrueType Fonts. 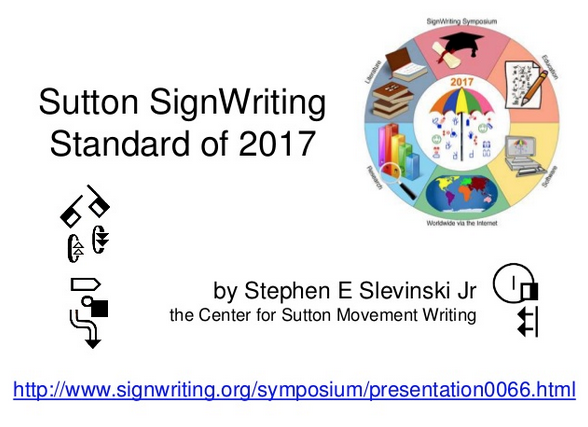 This presentation covers the characters and fonts of the Sutton SignWriting Standard of 2017.

Published through the IETF, this Internet Draft defines Formal SignWriting and the associated standards. 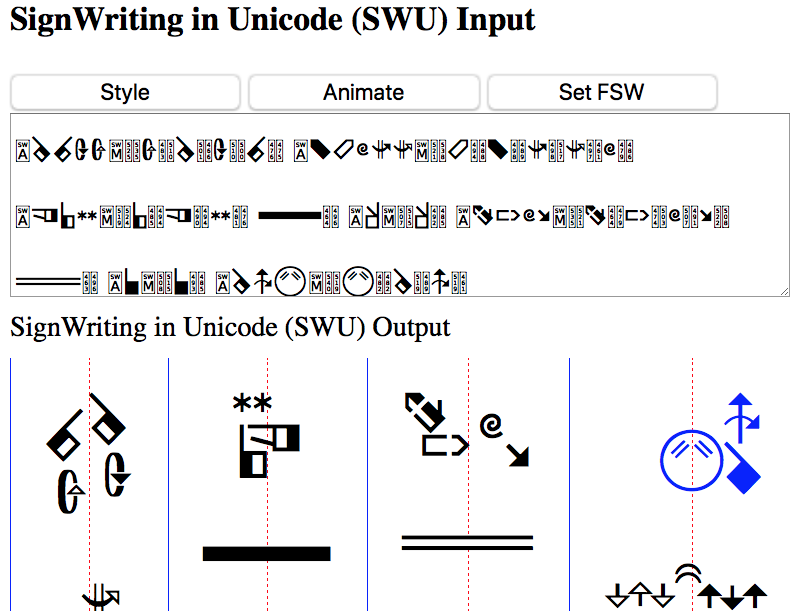 In 1994, I graduated from Grove City College with a Bachelor of Science in Mathematics, computer science applied.

In 1994, I was hired by the New York State Education Department as a Senior Computer Programmer / Analyst.

In 1996, I was hired by Danet Inc in telecommunications for quality assurance. In 1998, I was promoted to the maintainer of the internal business systems.

In 2002, I became a friend of the deaf through my wife's work. I met many interesting people around Pittsburgh and through the Western Pennsylvania School for the Deaf (WPSD).

Since 2004, I've been working with and collaborating with Valerie Sutton, the inventor of Sutton SignWriting, and with sign language groups in more than 60 countries around the world. Some of these groups are prominent and other groups are disadvantaged and marginalized. Some sign languages only have a few thousand speakers. Other sign languages have millions of speakers. We can write them all.

When I started with SignWriting, I created a mathematical model. My model was based on Valerie Sutton’s design and historical use. Over the years, as my knowledge and experience increased, I recreated the digital encoding of SignWriting text using standard technologies for better processing. I am the encoder of the Sutton SignWriting standards of 2010, 2012, and 2017. These standards are stable and free.

All of my work is free to use, including the fonts, tools, the encoding details, the dictionaries, and the documents. For SignWriting to truly spread, it must be free.

Our work isn't complete. In another 10 years, Sutton SignWriting will be firmly established both in education material and in technology. For now, there is still work to be done and higher level tools to be made. Regardless, every year, SignWriting continues to grow online and in the schools and communities.

From 2004 thru 2019, I was a paid consultant to the Center for Sutton Movement Writing non-profit. The end of 2019, the CSMW closed the non-profit wing of the organization. In 2020, the CSWM is an all volunteer organization without financial means.

Starting in 2020, I have assumed full responsibility for administering and financially supporting the SignWriting websites, such as SignWriting.org, SignBank.org, MovementWriting.org, SignPuddle.com, and more. These resources will stay online and freely available to the general public.

I currently donate my time to support SignWriting's past, present, and future. The income from the Patreon campaign is able to cover the hosting fees for the websites.